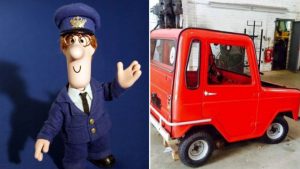 Working with private clients and homeowners with substantial gardens takes the allgrowth team far and wide across the UK.  But sometimes, we stumble across a new customer right on our doorsteps here in Cambridgeshire.  Peter Middlicott, chief allgrowther, was attending a track event in Bedford last month and overheard and recognised a voice he had previously heard on local

radio.  The voice belonged to Ross Taylor, owner of a local crisp firm in Pywood, near Ely, Cambridgeshire.  Ross had been on the radio bemoaning the fact that one of the company’s publicity vehicles, a 1972 William micro-car fashioned into Postman Pat’s van had been stolen from their premises.

The red post van had been stolen from an outbuilding at Corkers Crisps and a reward of £2,000 or a lifetime’s supply of crisps had been offered by the owner for its safe return.

Peter took up the conversation with Ross after recognising his voice from a radio interview.  As with these conversations, they invariably turn to business discussions.  allgrowth are now supplying trees for Corkers’ business premises, with the potential to work with Ross further on his own property and garden planting.

If anyone has any news on the whereabouts of Postman Pat’s van – including Jess the Cat – you can contact the company via their webpage. For the full Postman Pat van story, see the article in the February 2016 Ely News.